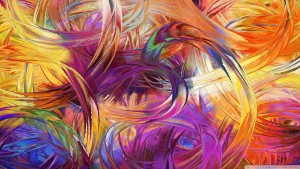 One morning this past summer, my companion was getting ready to head out to do some work for his Mom. He dressed wearing a very extra large and baggy (comfy), old work shirt. I made a comment about his comfy shirt and as we chatted I was suddenly presented with a memory of kindergarten when we used to wear our fathers’ old shirts backwards to protect our clothes from the mess of craft time and especially flying finger paints! I hadn’t given finger painting any thought at all since. END_OF_DOCUMENT_TOKEN_TO_BE_REPLACED

My Mom presented me with something wonderful this past week! She and Dad have been catching up on their framing projects. Several years back I had given her two pieces to frame for me, I cross-stitched the clowns to hang in my son’s first bedroom – about 25 years ago. Looking at them instantly reminds me of where I’ve come from for sure, and takes me back to a time that seemed a whole other life!

Well they’re finally done, love the frames, thanks Mom! I don’t believe my son would want them for his bedroom, and perhaps for his own little ones one day?

For now they sit by my desk, they cheer me up and their orange hair matches the room… 🙂 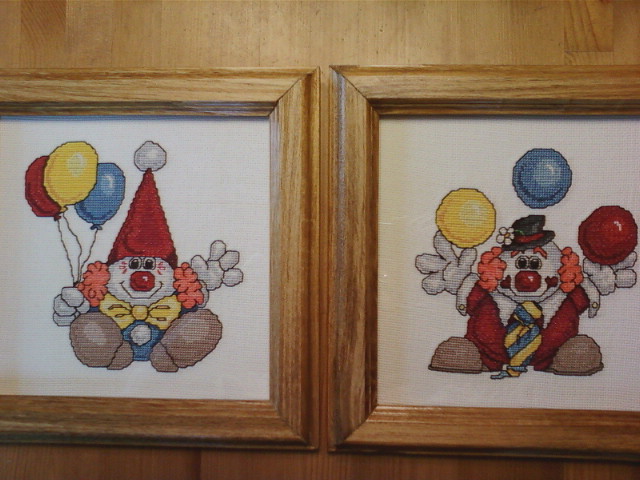 (Not the Rockies, and it is a gorgeous view of the Toronto skyline from the balcony where I stayed before we flew out.)

Happy 4th of July to my US friends! 🙂

I think this is the 3rd year in a row I’ve been here in the US to celebrate with you all!

My good friend Andrea is still sawin’ logs after a long day of travel. After a few hours in the air and airports, we picked up our car, grabbed some treats and foodstuffs and headed for the hills! That’s our shadows waving to you, it was a LONG way down from where we were standing! It smells so good here, miles and miles of pine trees and running water everywhere!

I’m typing to you this morning from the wee town of Leadville atop the beautiful and majestic Colorado Rockies, where – as the sign says, “Life is fine at 10,200”, and I’m here to tell you the air is definately thinner up here! We were cautioned by one of the natives about unseasoned sea-level people and “altitude sickness” as they drive up the mountain. It pays to listen to the natives…we didn’t notice it until just after the Eisenhower Tunnel at almost 13,000 feet when we stopped the car to snap a few pics. We took a turn off of the main I-70 and decided to weave our way across some not-so-traveled road on the way to our desination at Snow Mass Village where we have a 2-bedroom ski chalet rented with 4 others! We’ll be driving through Aspen later this afternoon to hook up with some of our buddies heading in early for the party. 🙂

It’s just before 7am and I’m on the patio of a quaint and country-style inn – bundled up – with my laptop and a coffee watching the sun come up over the mountains.
There’s a hummingbird already happily chirping away on the feeder right beside me.

The nice man at the Budget rental office took a liking to us and decided we needed a spiffy and sporty little Mustang to drive around the mountains in this week! Hot damn! I was just looking at one on the weekend and thinking how much I still like those cars! So the Universe has answered of course and gave me one to test-drive!
(I found out yesterday that it isn’t good to ride the brakes at 65MPH on a 7% downgrade…I still don’t like the smell of burning rubber, and I’ll mention it when we return the car. For now, we’ll stay in the slow lane. We don’t miss as much that way.) 😉 Not that I’d wish it on any one trucker, and I’d really like to know how often the very steep runaway-truck ramps positioned at the bottom of the downgrades gets used!

We’re off to participate in a small-town USA July 4th parade and celebration today as we make our way to our destination, I’ll be back with some more pictures and adventure stories when we stop again for the evening.

Wish you were here! Have yourself a glorious day!

Ya’ know, we’re gettin’ REAL good at this manifesting thang…

A few short years back we were watching a very cool sci-fi series called “Firefly“. It was produced by Joss Whedon of the “Buffy and The Vampire Slayer/Angel” fame…a couple of other shows I don’t mind believe it or not! 🙂

Firefly was a clever merging of the Old West and Outer Space…the characters were fascinating and the stories were fun!

A couple of days ago, my good friend and roommate Wayne was mentioning he wanted a “Jayne hat” – he had to explain to me what that is, and once he mentioned the series and character I knew exactly what he was talking about – we all watch Space channel. This VERY particular hat is worn by a Firefly character named Jayne Cobb…Ma Cobb made it for him…

In light of the fact that I’ve been a one-woman, knitting force lately, Wayne asked me if I’d be willing to make him one…I gladly accepted and told him that if he found the pattern and a picture I’d whip one up!

Well…last night I heard him giggling from behind his computer screen and moments later, “ahhh Juls? I found a picture and a pattern for the Jayne hat…”

He sent it over to me in email, I opened the picture and the first question I asked was, “Do you really want it in those colors?”

He laughed and said, “Well of course! Otherwise it wouldn’t be a “Jayne hat”…and then went on to mention that, “only a REAL man could wear a hat like that…”

So here’s the magical co-creative part…I actually had the exact same colors and enough of them to make the hat!!! That’s almost a miracle since I had those particular balls of wool slated for being tossed out because I realized that working with certain colors doesn’t feel good… 😉

In this case, I’m not minding working with those colors, I keep picturing it on Wayne’s head…which will happen ’cause I’m going to make him model it when it’s done later today…

Law of Attraction Practitioner and Master Manifestor
The Diamond’s Mine 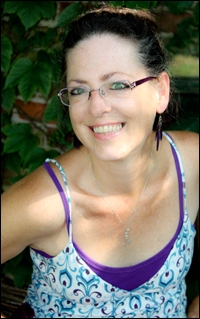 Work With DiamondJul, The GPG and Jeunesse Global